How to download Ibis paint on Chromebook: Ibis Paint is a well-known painting/drawing app that offers various drawing tools designed specifically for diverse drawing styles. It features, among other things, 7100 brushes, over 900 fonts, 79 filters, 46 screen tones, 27 blending modes, and 2800 materials. It also includes a stroke stabilization feature, recording feature of drawing processes, ruler features, and a frame divider for art styles such as manga. It also includes Mesh Form Tool, editing any illustration’s size and shape and rough balance edges. With its extensive set of tools and features, this software quickly rises to the top of the list of digital art apps.

Ibis Paint can be downloaded on several devices, like iPhone, laptops, androids, and including Chromebooks. Chromebooks are a new computer curated to help you get things done efficiently and quickly. It runs Chrome OS, a kind of operating system that includes layers of security, cloud storage, and the best of Google and offline apps for usage when the Chromebook is not connected to the internet.

Chromebooks vary from traditional laptops in that they run distinct operating systems. Laptops use the Windows operating system, whereas Chromebooks use Chrome OS, a stripped-down version of the Chrome browser with limited functionality. On the surface, they appear to be the same, but they are not.

Note: It is preferable to contact the administrator for further information and support. The Google Play Store and Android applications are inaccessible when using a Chromebook at school or a business.

You can download Ibis paint easily by using simple steps.

Step 2: Log in to the Google Play Store, pick the time at the bottom right and click Settings. Google Play Store requires you to enable the area beside the labeled ‘install applications and games from Google Play on your Chromebook.’

(In case this option is not visible, then your Chromebook does not function with android apps)

Select ‘more’ in the window that appears next. The agreement to the ‘Terms of Service’ is required; once finished reading, click ‘I Agree.’

Step 3: now, you can download the Ibis paint x app.

How to install ibis Paint X on Chromebook using APK?

The following steps are to install the ibis paint X APK file on a Chromebook.

Step 1: from the play store on your device, the ‘file manager android app’ application will have to be downloaded.

Step 2: From the link below, download the ibis Paint X APK file of the applications you want to install. And meanwhile, go to Chrome OS Settings and select ‘App Settings’ from the Android Apps section.

An android-like settings page will open up. ‘Unknown sources’ should be turned on by going to the security.

Step 3: Once the APK file has been downloaded, open the file manager application and navigate the Downloads folder. Now, open the APK file, and you should see the standard app installation window from Android; now, hit ‘install.’

Step 4: Press the open button after installing, and you can use the app after that.

If it’s an ARM-based Chromebook, Ibis paint will function better. Overall, ibis paint is a versatile paint program that you can use for various activities. Anyone may download Ibis paint on a Chromebook using the procedures outlined above.

The beginning of all things? The time when we first touched the pencil and did various sorts of scribbles to…

GoodNotes is an excellent application that makes learning fun. If you need to document notes, design flashcards, or create PDFs,… 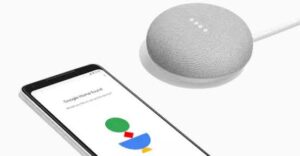 Do you wish to trendset yourselves with smart speakers? Want to make tasks easier? Handle your work at the tip…

Viva Video for PC is the most trending video editing app between the youths. Now-a-days people are suckers for video editing…