Procreate quickly developed from a pure entertainment drawing application in 2011 to the viral and successful professional digital art media that it is today. This is not just a coincidence, and it’s not all because Procreate is one of the oldest painting apps ever to come out on iOS or for the iPad.

Currently celebrating a decade of hard work and success, Procreate is in a powerful position with version 5.1.5. The app is so popular that it has inspired a sort of highly loyalist following that cares about and plans to try no drawing apps other than Procreate. This is very good for business, even if it might not be the most incredible thing for those particular consumers. After all, Procreate is a business whose primary purpose is to make money first and foremost.

Procreate earns massive revenue, even with a relatively user-friendly and cheap pricing structure with just one payment of $10 to permanently own the app forever, or at least as long as it’s available on the App Store. However, their developers – Savage Interactive – have proven through their long-standing actions that money is not all they care about.

They’ve managed to capitalise on market gaps while also addressing faults and gaps in their software simultaneously through techniques that seem almost genius from an outsider’s perspective.

Love it or hate it, nobody can deny that Procreate has had a universal, lasting effect on the digital art market, at least for tablets. It hides its true intelligence, but Procreate is a very smart piece of software. The application is not just as simple as it leads you to believe, and there’s quite a lot going on away from the public eye, under the surface.

Procreate is a very complex software behind the scenes, even though its UI makes it look very simplistic and easy. That effect stems from just the vast skill Savage Interactive have at their disposal. This hidden complexity can be a little too hidden for power users and professionals, and they likely want as many options as efficiently as they possibly can. And while Procreate does allow you to do quite a lot, you might have to waste time navigating through menus or messing around with settings when you should just be focusing on the art and the process. To fill this gap in their design, Procreate introduced the “QuickMenu” in Procreate 5 onward.

Procreate’s QuickMenu is a radial six-button menu that’s completely customisable from what each button does to the shortcut that calls this menu up. You can even set up multiple profiles and switch between them for an effective and efficient workflow. If you use an Apple Pencil (which you really should be using on an iPad), then you can even set this QuickMenu to pop up with a single finger tap! If you’d rather not have it be something as easy to misclick, you can also have it be just about any other gesture you could think of: long-press, double-tap, three-finger swipe, etc. It’s great that Savage Interactive allowed so many options, and that’s part of what makes Procreate so great.

First, let’s discuss how you can turn this QuickMenu feature on; or even off if you end up deciding that you don’t like it after all. This guide is designed when using the app in landscape mode, and some steps may vary slightly if you’re using portrait mode.

How to use Procreate’s Quick Menu for Faster Art

Now we can get to customizing our QuickMenu. Ensure to keep everything as natural and methodical as possible since that will help with efficiency as you get used to the QuickMenu.

I recommend making different presets with your most common brushes and/or colours, maybe one for layer actions, and accordingly adjust more or less based on your workflow and habits. The QuickMenu is a powerful tool and should not be underestimated. I’ve likely saved more than 10 hours overall by just having the QuickMenu instead of stumbling through long, confusing menus and lists. However, most important is to make a “default” profile. You see, the QuickMenu opens back onto whichever menu the user leaves it on, so having a general “default” with your most common actions can be highly useful.

Procreate is an awesome graphical artwork app used to create stunning detailed paintings. This is an iPad app software which…

Procreate is a raster graphics editor app where an individual can edit or illustrate digital paintings for iOS. It is…

Let us quickly see what do procreate means in the real sense. Well, Procreate is an iPhone and iPad software… 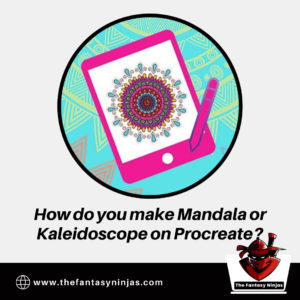 Do you want to make some good Mandala on your Procreate? Traditionally creating Mandala or Kaleidoscope is quite tough. You…

Have you recently explored Procreate and started creating different artworks on the application? Learn to add details and use various…

How to Download Procreate Pocket on your Chromebook: Have you finally stepped out of your Android boundaries and purchased an…